The nights are starting to draw in and fires are beginning to be lit at the Exelby Green Dragon although there are still some great days to be had in the Beer Garden as we experience something of an Indian Summer! 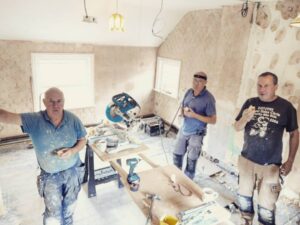 As scheduled work to create the bed and breakfast accommodation in the upstairs rooms is underway.  What used to be four rooms will be made into three good quality letting rooms with en-suite facilities.

There used to be two rooms above the cafe area.  One was just a small 'box room' that had been partitioned off from the main room sometime in the past.  This area will revert to one large room.

Basically everything has been stripped out back to the structure.  There have been a few surprises as ever, so some structural work has been done to allow the reinstatement to go ahead including sound reducing measures.  Some of this was also precautionary whilst there was an opportunity to do so.

The entire floor is being rewired so that each room has its own circuits - after dragging out a few miles of old and redundant wiring that had been added to and adapted over the years.  Similarly old pipework has been stripped out and there will be a new central heating circuit that is controllable independent of the main pub as we did with the restaurant area.

Plastering work is currently underway and then the fit out work can start which will take 2 to 3 months overall.  As ever progress has been helped by those who have been able to volunteer time from stripping wall paper,  to the actual stripping out and helping with the rewire - to name but a few activities so far.  This is hugely appreciated and a special thanks for now to Tony, Mike and Dave.

Hopefully you will have noticed that the pub has new windows all round.  This was an identified item of repair that we did not have the funds to tackle in the first wave of improvements that were committed to when we first bought the pub. However shares have continued to be sold and as the windows were one of the next priorities we have been able to replace them.  This is not just about aesthetics but will aid future maintenance, energy efficiency and noise reduction for the B&B rooms.  It also made sense to tackle this whilst the upstairs rooms were being refurbished rather than to have the mess and disruption all over again.

Some additional improvements have also been made with kitchen equipment.  It is hoped this will deal with some niggles remaining from the initial installation and help support customer service.

Over the coming weeks, Peter will be there pretty much most of the time. If you would like to visit whilst works are in progress please feel free to drop by.